You are here: Home / Guides / How to Sight in a Compound Bow – Step by Step Guide

Archery is an ancient art which has been practiced and reinvented for thousands of years, from the Egyptians, Greeks to the modern period. In archery, a bow and an arrow are the primary components which are aided by sight and the skill of an archer. Its status remains unchanged, but its purpose saw many a transformation from mere hunting and war killing weaponry to one of the elite sports.

Its popularity has survived along the years and is prominent in creating amaze amidst its audience. The primary component is the bow, which is known to be the oldest mechanical device to achieve speed when pulled back rather than throwing it front with force.

There are various forms of a bow, for example, Recurve Bow, Compound Bow, Longbow, and Crossbows. Among these, Compound bows are the most preferred option for hunting and shooting games.

However, it is a complex mechanical item which requires fine-tuning before attempting to shoot a single shot. The archer needs to learn the art of how to sight in a compound bow. It is the process of tuning the sights to hit the bull' s-eye on a set sight-in target.

It requires a constant attempt to achieve desirable results. For this purpose, below are the steps to master sighting-in the bow.

You will need a level to place a chunk of tape at a right angle to the horizontal plane set for the target. Then, place another chunk of tape running horizontally. You need to conjointly mark these directions on cardboard and place it upon the targeted location.

Different markings could be made so that one would recognize if there is any foul arrow within the bunch. This is done for the reason of recognizing the off-track arrow and for reassurance of the proper stretch of one's hand.

Pro-tip: You could also mark the fletchings of the arrows for differentiation.

Begin by maintaining a 5-yard distance, measurably, across the target for releasing the initial shots and keeping the view of the left and right plane attempt to sight again at the vertical plane.

Attempt to make 3-4 shoots while keeping in mind the vertical plane to measure whether or not you wish to manoeuvre the pin to whichever direction it is required to be adjusted.

Take the aim, once again, according to the changes made, if it was far from the bulls-eye and was hit in the outer circle, then keep your aim to shoot near to the last arrow.

This is done to understand how much change is required to come to a satisfaction point. One needs to repeatedly shoot and make adjustments until it hits the middle of the set plane. Stand on the point of the target on your initial few shots to confirm you are striking on the point of the road.

A frequently asked question is how would one know to which direction the pin needs to be adjusted. The answer to this is to mindfully set your vision on the flight of the arrow and make adjustments accordingly.

For instance, if you hit left of the tape, move your site left; if you hit right, move the sight to the right. The desirable setting is possible after 3-4 adjustments. 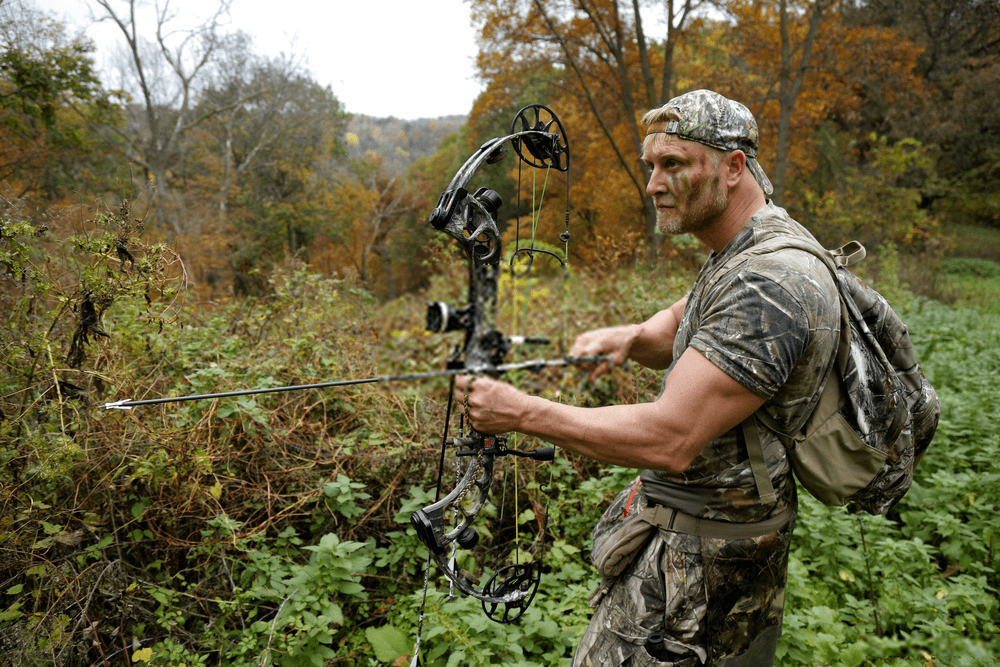 Next, attempt for a 5-yards distance shoot while keeping in view the horizontal plane using the top pin. Ensure that the adjustments are made correctly unless and until the top pin is reaching to the set plane.

A useful tip- the process would be more natural if one moves about the distance of 20 yards. There is not much hassle required since the pin will be adjusted again to make a trial for varied distances, in order to cover the learning of shooting at various ranges.

Now, stand at a distance of 20-yards, approximately across the target and aim at the horizontal plane using your top pin. Keep on adjusting the pin until it hits the center of the line. If a single pin is locked in, then the rest of the pins could be adjusted by moving each of them individually.

A pro tip would be to use a rangefinder to calculate the distance required to set the pins at optimum accuracy.

Another question regarding the adjustment would be- which way should we move the pin. The answer would be simple- please follow your arrow because if it hits above the tape then move the sight and if it hits below the line then adjust the sight downwards.

A small tip again- please ensure rest before attempting to do this since it is an absolute factor to be kept under consideration even at the cost of struggling with the sighting-in process. One could make use the same methodology for any 30, 40, and 50-yard pins.

You can repeat the above-mentioned process for taking the place of the next desirable location, to an approximate distance of 30 yards. Later, one could move onto 30 and then 40.

You can re-check your adjustments by shooting at the vertically aligned plane, and make further changes to the upper and the lower position of the bow. There will be many new changes found that were not visible earlier and which will now be noticeable if the distance is changed, for instance, from 5 to 10, 20 0r 30 yards.

If the tuning is carried down successfully then it will yield to desirable target. This process would surely guarantee the proper sighting-in of the compound bow.

The compound bows are known to shoot an arrow over 1000 feet and where a modern crossbow can range up to 500 yards. However, due to certain rules and regulations of hunting, there are strict rules regarding the shooting of the animals in the forest. The majority of the people are stuck with the "effective range", which lies between 30-60 yards distance.

However, recent top pin settings are selected for both timber and the open fields are 20 yards. There are various steps given in order to achieve a finely tuned bow by utilizing the process of sighting-in.

Along with the steps, there are certain tips given to ease the process of adjustment.